It’s no secret that were are lovers of vegetables. As Chicago residents (without a yard), our options for growing our own vegetables are limited.  A few years ago, we built a wooden planter to sit on the railing of our back stair entry.  We were so excited that we planted way too much stuff in it.  We ended up with some herbs and a few little tomatoes, but it was far from the hobby farm we always sit and daydream about.  It was such a sad sight.  In other years, we have grown herbs, beans, peppers, and even tomatoes in the window sills of the kitchen and dining room. These efforts didn’t pan out so well either.

Last year, we talked my parents into letting us put some raised beds in in their yard.  We installed them in May, and in our excitement, we overplanted them as well.  More on that later though.  It was a super busy summer for both of us, and my parents are over an hour drive away.  They were nice enough to put a timer and sprinkler system in so the watering was taken care of.  We did a little bit of weeding each time we visited and, as much as possible, went to their place to pick things when they were ripe.  My parents also were generous enough to pick things for us when we couldn’t make it out and met us to drop off the goods.

We decided to do raised beds because we thought it would be an easy way to contain the plants, creating a neater look in my parents’ yard. They are also easier to control in terms of turning the soil, fertilizing, planting, weeding, etc.  My mom had some planter bags that she had used in previous years as well which she gave over to us to plant in. 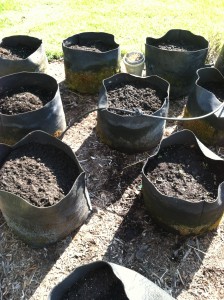 Here is how we did it. We bought metal corner supports which allow you to just drop in some wood and make your beds.  We got ours here.

Our thought was that it would be easier to move them later if we wanted to.  I’m not sure that’s anything that we will actually want to do, though, after seeing how much soil had to go into them. My mom was kind enough to volunteer her cloth pots for us to plant in as well, so we threw those into the mix too. 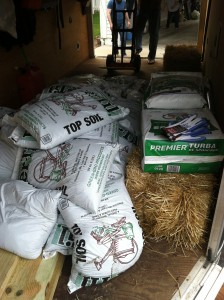 My dad drove his trailer to the hardware store for us, and he and Kevin loaded up a bazillion bags of soil, gypsum and peat moss.  (We didn’t keep count.  It was a small amount of the peat moss and gypsum.) We also added some horse manure which we took from the pile behind the barn, and we added a layer of straw.  Here is proof- Kevin vs. the straw:

When it was all finished, we planted seeds straight into the soil and transplanted our little plants we had started in our house earlier in the year.  Look to part 2 for what we planted. 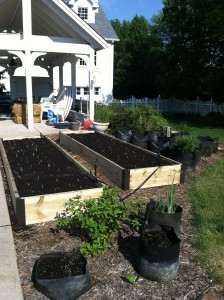