A Fall Hat For Etta 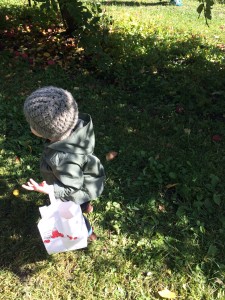 We went picking apples two weeks ago and it was COLD outside. While I am in an almost constant state of feeling ready for summer weather to end (I really hate wearing summer clothing), I must admit I wasn’t ready for the chilly weekend we had. I grabbed a few layers for Etta, and then realized I have no hat for her this year. So, on our way out I also grabbed a skein of yarn and some needles. I have been knitting hats for Kevin every year since we started dating, and have finished off anywhere from 1-3 per season for him. I have used my own patterns for him with varying degrees of success. A few years ago I settled into a tried and true pattern for him, including an absolute favorite yarn. We buy a new skein or two each year and I whip out a hat as fast as I can. Silly me though, I never seem to remember to write down the pattern so I end up kidnapping a hat and counting as I go. 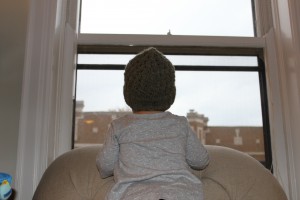 To draft Etta’s I measured both of their heads, counted the stitches of Kevin’s hat, and cast on the proportionate number of stitches (in a multiple of 4 for the ribbing). I wanted this hat to be somewhat loose and a little bit breathable for times that she doesn’t need a super thick hat. (That hat will be coming up soon in my queue.) 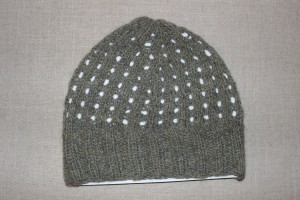 I chose to do a simple eyelet pattern and I’m quite happy with how it turned out. I tried to come up with a good way to capture the eyelets in a picture, and I ended up sliding a piece of card stock into the hat. The eyelets on the right look a  little big and the ones in the middle look a little small, but oh well. You get the idea (I assure you that they are very even in person). I don’t have a 3d form for things like this. I love this color on her and I am quite happy that it’s what I happened to have on hand, even though she got called a “handsome little man” when I took her out in it yesterday. What do you think? Would you put this hat on your little boy? 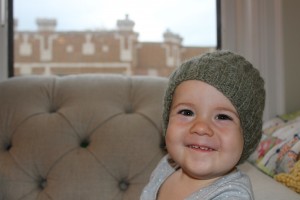 By the way, This is the yarn I used. This quick knit is also found here.