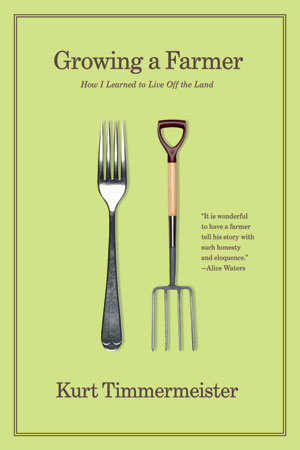 Review of Growing a Farmer: How I learned to Live Off the Land by Kurt Timmermeister

I devoured this book. Chapter by chapter, I felt myself grow as Timmermeister does, becoming more knowledgeable and confident in the ways of being a farmer. I know that we’re still far away from the dream fully realized by the author, still in the advanced planning stages of our future home, but this book gave me hope. Like myself, Timmermeister didn’t grow up on farm or with family members to turn to in order to gain the secrets to success when raising cattle or starting an orchard or establishing an apiary. Just as I’m doing now, when reading Growing a Farmer, he turned to books and trusted his intuition and relied on his passion for the work in order to overcome the substantial obstacles he encountered. And he succeeded. That gives me hope.

Obviously, his success didn’t come without a fair share of failures, but that’s exactly one of the things I respected most about the book: his blatant honesty. This more than anything else made the book a pleasure to read. His rolling, straightforward prose only accented this. He writes as much or more about his failures and struggles as about his successes. Which makes sense. And which proves so useful to any aspiring urbanite hopeful: the opportunity to learn from someone else’s mistakes and missteps. I’m not so foolhardy as to think we won’t make our own mistakes, but Timmermeister carefully explains his various goals and steps toward them, for instance establishing an orchard, and what happened to thwart or allow that goal to come to pass. Oftentimes, he relays a mixed bag of results. The orchard, for instance, proved difficult when deer constantly devoured the whips of his new trees. Over time, many trees ended up growing to proper size, but he had to let go the control first.

Again and again, Timmermeister aims toward something and various difficulties arise that, had he been raised outside of an urban center, might prove fairly easy to conquer. But he lacks that knowledge. What he does have is his passion and perseverance and stubbornness and his drive to push forward despite those challenges and struggles. And most of all a willingness to roll with the punches. Whenever he writes about making some mistake or planning for some result that didn’t work out, I think, “well, I had no idea about that either” which really means that I would have made the exact same mistake. Perhaps, thanks to his informative book, I might not make that mistake now.

He writes, “I think that the goal of farming and cooking is to find your own way, to learn from the traditions of Europe, but then to adapt them to your climate, to your needs, to your skills and products. If I wanted to live in Europe, I would pack my bags and move. My goal here is to live my American life on my little farm, eating great food; food with integrity, not food that is imitative of my counterparts a continent away.” This passage comes in the context and chapter on butchering, but he’s obviously speaking to his greater worldview that he touches upon further as the book comes to a close. But I enjoyed his focus on adaptability, on forging your own path, and making something distinctly American.

We hope to follow our own path as well. We hope to make something of our own, that’s distinctly American, and obviously something that is of our area. There are many gems within this simple book, not necessarily first coined by Timmermeister but that doesn’t lessen their effect—be a steward of your land, have respect for your animals, and follow the direction of your own area, climate, and place. I would recommend Timmermeister’s book for anyone with dreams and aspirations of starting your own small farm. If nothing else, he illustrates the amount of work and dedication required to make such an enterprise succeed. Obviously, this path isn’t for the faint of heart. But the rewards… I can taste the sweet, freshly-pressed apple juice he writes about, taste the honey just gathered, and lay my hands onto the sides of the furry beasts at the farm. I can dream and hope for our future.