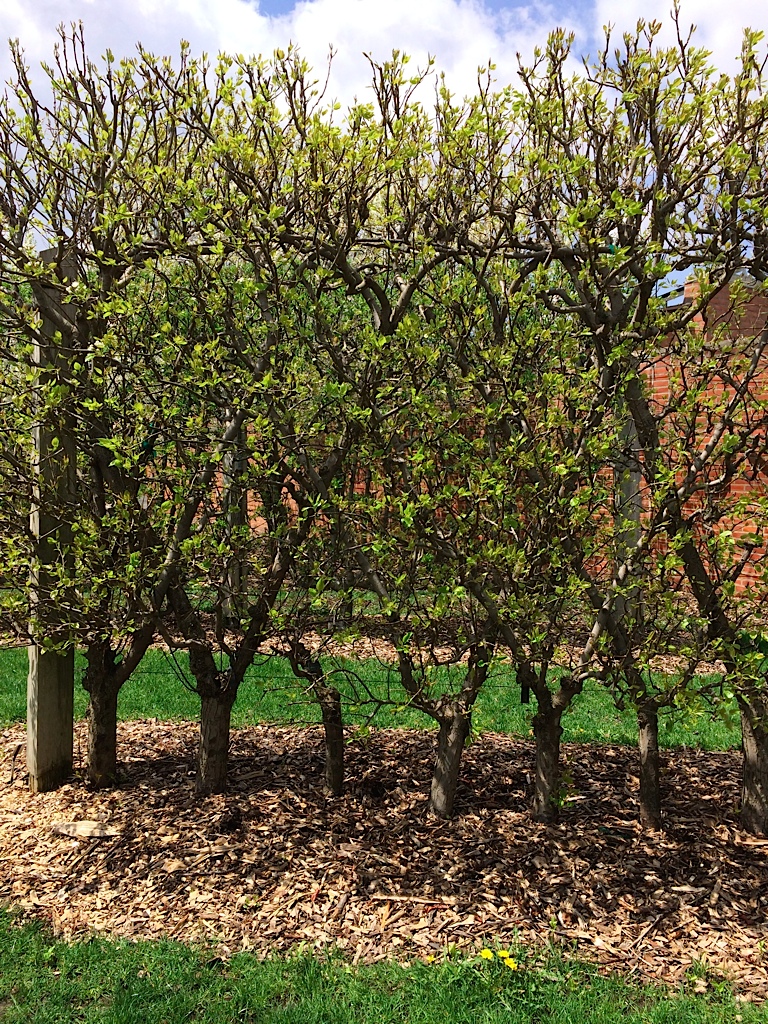 Something we’ve been interested in for a long time as we plan for our future home has been the idea of a mini-orchard. We picture harvesting our apples and pears and peaches and cherries, bowls of fruit to eat and preserve for later. We imagine our espaliered fruit trees running along brick walls. Though this isn’t something we can do in the city right now, we looked to the future this past February while taking a class called Fruit Trees for the Beginner at the Chicago Botanic Garden.

The teacher, Glenn Grosch, who was somewhere between a lovable curmudgeon and Kurt Vonnegut (if he had been an arborist), put together a solid introduction and PowerPoint presentation on fruit trees. He covered everything from buying trees to planting them to pruning them and more. I won’t go into extensive detail on everything he said as I recommend taking the class if that’s what you’re after, but I’ll give an overview of the things that really stuck out to us.

One of the things he talked about that I had never considered before is the size of the trees themselves. If a pear or apple tree grows to 20 or 25 feet, how might you pick your fruit? Having gone to a few u-pick apple orchards, I assumed that trees for the most part just grew to a size convenient to picking. As happens many times, I was wrong. Glenn talked about dwarf varieties of many fruit that peek at much smaller sizes—for instance eight feet for apple/pear. Either way, as we’re planning for our future orchard, we’ll keep in mind many of the activities surrounding the trees: pruning, spraying, and picking.

Another thing to consider, or at least what I hadn’t considered before, was the topic of pollination. While the active part of pollination involves insects by and large, unless the fruit tree or bush can self-pollinate (like blueberries), the fruit needs cross-pollination. To complicate matters, these fruit trees might need two or more cultivars to cross pollinate with, which can also come with specific needs. For instance, a certain variety of apple like Cox’s Orange Pippin might work best with particular cultivars like Golden Delicious in this case. I thought it was enough just to make sure that the tree doesn’t die and that there might be bees around. As Glenn pointed out, the catalogs that sell the trees usually include details of what cultivars work best as well as a host of other useful info. He recommended Stark among other places to buy fruit trees.

At the moment, we’re planning for our orchard in our minds only. But the class also covered another factor to consider: location. Glenn talked about the importance of good air circulation among your trees. You want to allow plenty of room between them to prevent moisture issues. Fruit trees don’t like to be too wet. Fungus does. And you don’t want that hanging out with your fruit. He also talked about health issues that can develop if you choose to big of a tree and try and just prune it down to a manageable size. Much better to choose a smaller variety in the first place.

Another dream we have is to espalier a lot of our trees. We could tell that Glenn wasn’t a big fan of this idea. Don’t worry, we didn’t voice this to him. He did however mention that depending on how you situate an espaliered tree can affect its temperature requirement. As fruit trees need a specific number of days below certain temperatures in order to fruit the next year, putting a tree against a southern wall will meet the chill requirements sooner—thereby exposing the tree to greater risk of having early blooms frozen by a late frost. So many things to consider!

I get the distinct impression that our future, despite our best efforts, will hold dead trees and botched attempts at careful pruning. There is just so much to learn.

After much more information and a hand-out and the rest of a PowerPoint presentation that was constantly interrupted by a computer trying to restart in order to update, we then headed out into the cold but sunny winter morning and marched over to the section of the Botanic Garden that houses the fruit and vegetable gardens. Glenn, dressed in thick Carhartt overalls, carried his handy pruning loppers lead us down a snowy path that had been cut through the piles of snow from our heavy winter this year. It’s hard to imagine it all right now as I’m looking through the Stark catalog and warm now late in the summer. He stepped off the walkway and tromped through the crusted snow in order to show us where he would make certain pruning cuts, taking off a branch that was too low or clipping away a vertical branch. Surprisingly, he actually started to make a few of those cuts, leaving the branch in the snow as he moved to the next tree.

We made our way over to one of our favorite areas, the espaliered fruit tree section. Though Glenn had mentioned the difficulty of training fruit trees in the Midwest, we still can’t help but fall in love with the practice of espalier, particularly the many forms on display at the garden. We picture our brick walls made from reclaimed or second-hand bricks with fruit trees splayed across their surface. Obviously, the task won’t be easy, but that’s not really why we’d be doing it. The act itself will be its reward in many ways. The benefit of easier picking and the beauty of the trees will be a fringe benefit. We were cold, and, though the trees retained a sense of grace and stark beauty in the winter, we didn’t spend a lot of time photographing them.

Since then, we’ve returned to the Botanic Garden. We enjoy so much of the gardens themselves, from the English Garden with it’s wonderful nooks to the amazing array of bulbs that crowd the grounds in the spring, creating thick pockets of bright tulips. We always spend extra time going back to the orchard and vegetable gardens. We always stop by the apple trees trained against the brick walls: 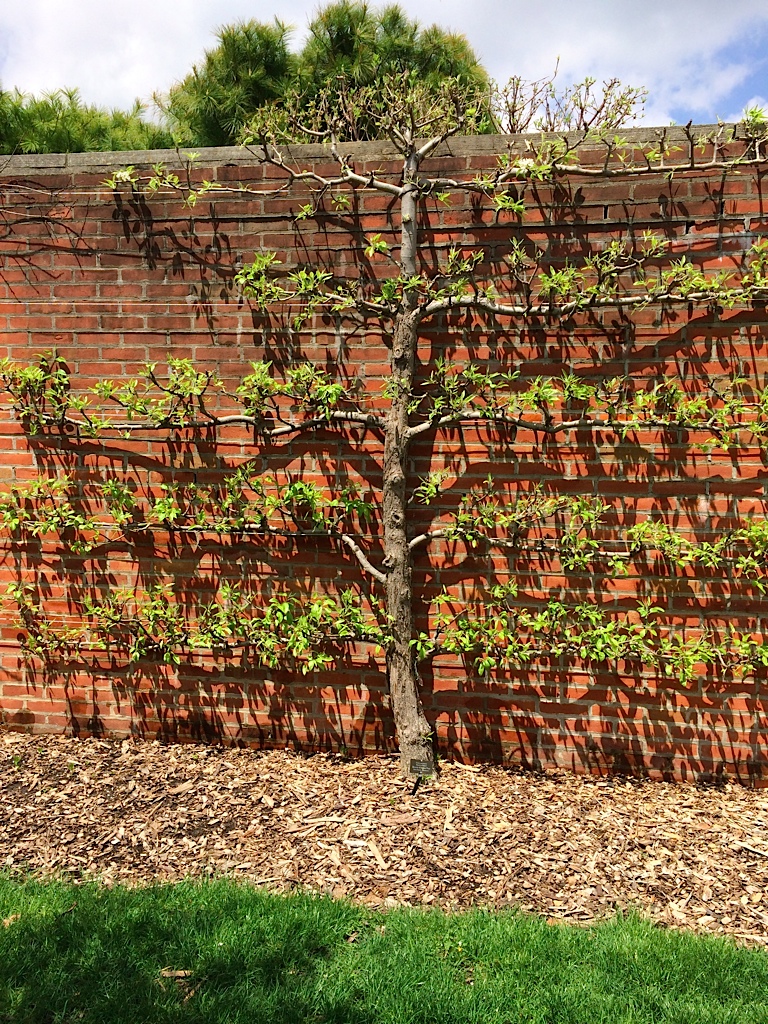 And the amazing trees carefully trained in their arch to allow us to walk beneath in dappled shade. As always, we can continue our education, learning about this technique–the pleaching of trees where the tree branches are woven into a frame, while the smaller shoots are removed. Eventually, the branches have a chance to grow together to form a controlled natural arch. It’s a beautiful thing, working with the trees like that. Something we dream about as well. 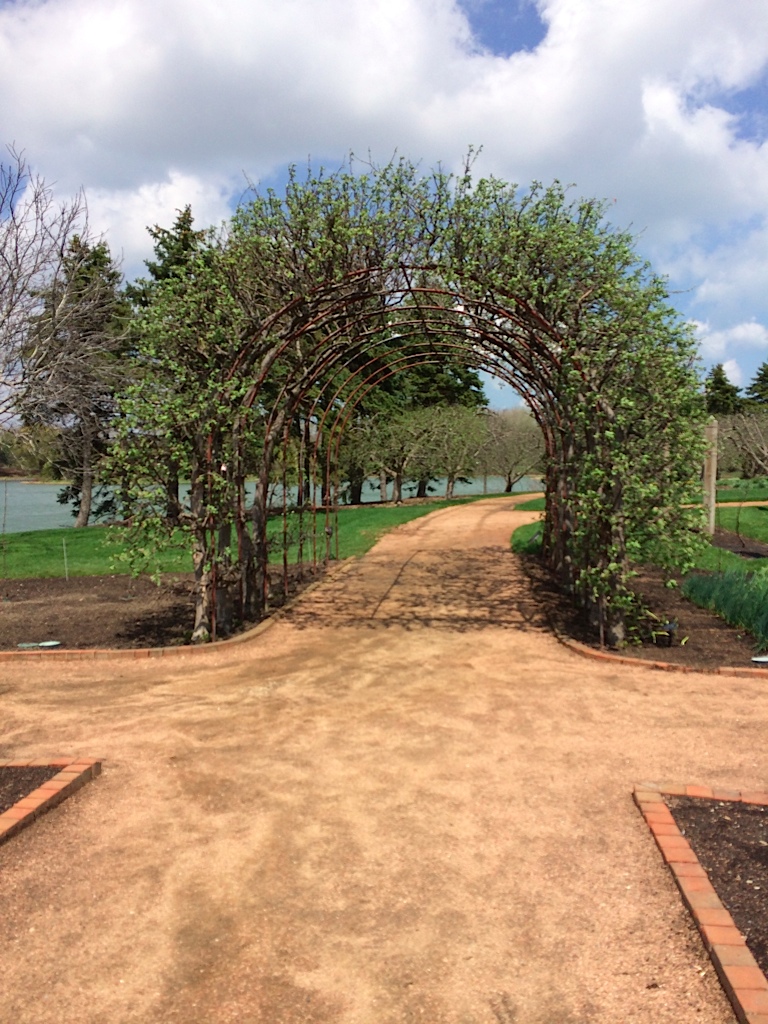 We’ll continue to return to the gardens, again and again, eventually imprinting into our minds the afterimage of these beautiful creations designed not only for aesthetics but to easily reach the plump, ripe fruit. 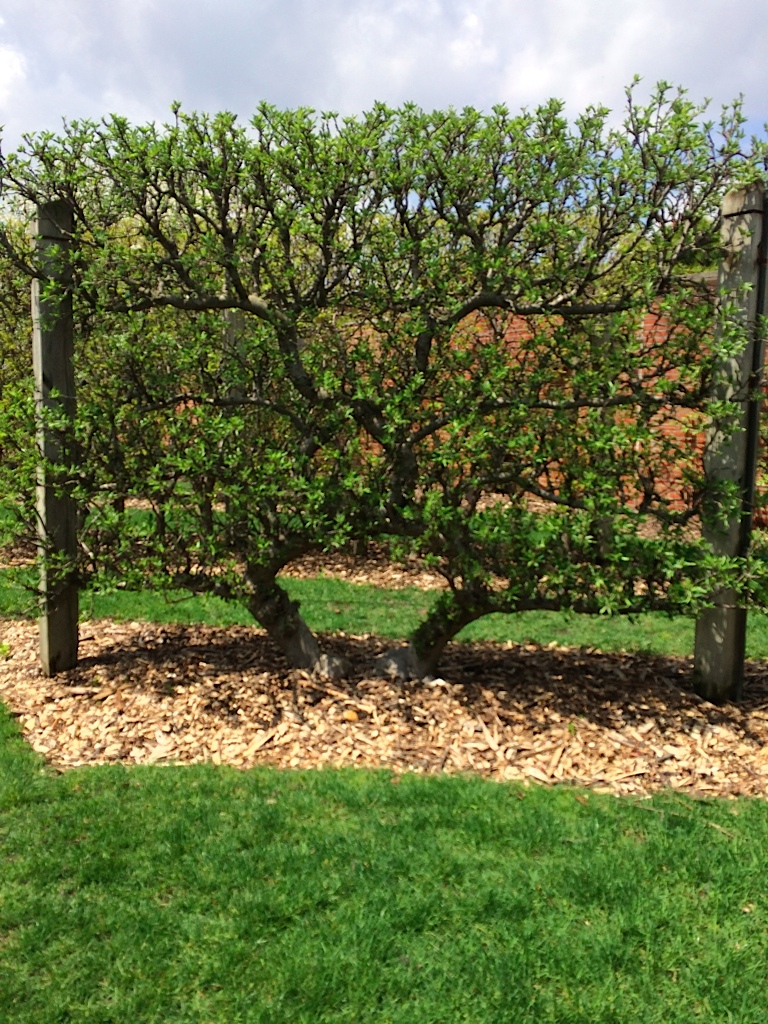